Loan Classroom / May Jobs Report is a Mixed Bag of News

May Jobs Report is a Mixed Bag of News

Once a month, on first Friday’s, all eyes and ears of Wall Street, Washington, mortgage professionals across the nation, and even some on Main Street are tuned in briefly to one big thing: the health of the job market in America.

Each month on the first Friday, the Bureau of Labor and Statistics (bls.gov) gives us the read on the Job situation. In fact, they call it the Employment Situation Summary, and it can have a big impact on mortgage rates. Last Friday the situation was a mixed bag of news.

Employers have added an average of 234,000 jobs over the past three months which is a nice increase from the prior average of 197,000. With unemployment remaining steady at 6.3% it shows that the economy is gradually moving closer toward getting a job for everyone who wants one. 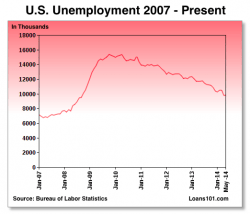 The best piece of news in the May Situation Report is the U.S. has finally replaced the 8.7 million jobs lost during the recession.

While this is good news, job creation has not kept up with population growth. And a little bit of digging into the data shows continued fundamental weakness.

According to a calculation by the Economic Policy Institute, employment is still about 7 million jobs shy of where it should be in keeping up with population growth – the increase of working-age Americans. This is not to be confused with the 23.5 million Americans who either want a job or want to work full-time (versus part time) but the weak economy is not producing enough jobs yet.

Weakness in the report lies in that most of the gains, over half, were in lowering paying jobs. New hires in healthcare, bars and restaurants, and temporary help services accounted for 116,000 of the 217,000 jobs created.

What does this mean for the financial market, or more specifically, the mortgage market and mortgage interest rates?

When economic data reports are in line with the expectations of financial analyst, forecasters, and traders, typically there is very little reaction in the mortgage bond market when the report is released, therefore little change in mortgage rates.

If the financial markets are expecting an ugly or negative report, typically they will brace themselves for it in advance…so most movement in the mortgage bond market will occur prior to the release of the report.

On the other hand, if good news is expected, a rally could possibly be seen in mortgage bonds – again, in advance of the news item being reported.

If the economic report misses, then it is common to see a knee jerk reaction – mortgage bonds could move higher or lower rapidly on the news.

In the case of today’s May Jobs report, the mortgage markets were anticipating anywhere from 195,000 to 220,000 jobs being added. The data was in line with expectations and delivered little surprise to the markets. However, due to the mix bag of data – jobs creation was a good number but those jobs are low paying jobs and considered not-so-good news – mortgage bonds mustered a small rally. Keep in mind, mortgage bonds improve when news is not good.

As with any mortgage bond rally, mortgage rates typically improve either in the rate itself or the cost or credit of the rate.