Loan Classroom / Why Are Mortgage Applications at Their Lowest Level in 14 Years?

Why Are Mortgage Applications at Their Lowest Level in 14 Years?

Mortgage applications fell 7.2 percent last week to reach their lowest level in over 14 years, according to the Mortgage Bankers Association. Figures this low in September likely indicate it’s going to be a long, cold, rough winter for housing.

How are things so bad?

I’ve read several theories about why housing is struggling.  Some people guess Americans suddenly “like where they live” across the country and don’t want to move. Other’s speculate avoiding homeownership is a lifestyle choice or that millennials prefer living in their parent’s basements. Certain economists are even saying there is no fundamental economic weakness behind today’s numbers.

It certainly raises questions when glaring economic problems that so clearly affect housing are ignored. Beyond any shallow analysis or political spin, there are clear fundamentals that drive the housing market, and these numbers don’t lie.

Before anyone in America can be approved for a mortgage, they must hold a job for at least two years (or at least a steady income source such as disability or pension). In fact, the Federal Government recently created new mortgage regulations that made it a law to require steady income for mortgages, and it’s not subject to negotiation.  Applicants without reliable income won’t get a home loan in 2014 America.

Having said that, the U.S. is presently experiencing the lowest labor force participation rate in 36 years, meaning last month saw the highest percentage of Americans not working in nearly four decades.  With 92 million of 243 million (over 1/3) working age Americans out of the work force and ineligible for mortgages, there’s less people around to buy homes than there could be.

If the labor force participation rate were to return to it’s 2007 level, it would mean 8 million more people back in the jobs market, each more likely to buy a home.

A DECLINING CHART MEANS LESS PEOPLE ARE WORKING. PEOPLE WITHOUT JOBS OR INCOME CAN’T GET A MORTGAGE AND THIS CHART IS AT THE LOWEST LEVEL IN 36 YEARS.

Factor #2: Too Many Rules

Before the financial crisis, getting a mortgage was too easy. There was often no verification required for an applicants job, income or assets.  Applicants could even borrow more money from lenders than their home was worth.  I’ve not met anyone who doubts loose mortgage rules, greedy industry practices and lack of regulatory oversight were all contributing forces to the 2008 subprime collapse. 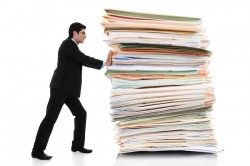 Following the crisis, expansive mortgage regulations were quickly implemented to prevent future problems. Some argue that enough new rules were created in 2009 and 2010 to shore up the crisis, ensure proper applicant scrutiny, prevent faulty property appraisals and reduce foreclosures in the future.  The new rules didn’t slow down after 2010, however, as loan applicants contend with wave after wave of new regulations. Right now, more Americans are disqualified from buying homes than every before and thats having a deep impact on mortgage lending volume.

Examples of new rules are everywhere. The most striking example is the Dodd-Frank Wall-Street Reform and Consumer Protection Act of 2010. “Dodd-Frank”, as it’s commonly referred to, is the most sweeping and controversial banking/lending overhaul in history. This massive bill was originally moved through Congress without any Republican votes and signed into law by Barak Obama on July 21, 2010. Dodd-Frank was much too big to implement at one time so it’s been rolled out piece by piece over the last 4 years. The massive law is approximately 56 percent implemented as of this month.

The latest round of Dodd-Frank mortgage rules to be released are the “Qualified Mortgage” (QM) and Ability-to-Repay (ATR) rules.  QM and ATR reforms add regulations to various lending aspects with potential to affect volume (outlined below):

It was originally estimated that Qualified Mortgage rules could have a negative impact on 12% up to as much as 20% of total mortgage lending in the U.S., with an asymmetric negative effect on minority borrowers.  QM hasn’t been around long enough to measure the overall effects, but the opening numbers aren’t good.

New rules have made it so hard to get a mortgage that even the former Federal Reserve Chairman Ben Bernanke recently stated “it seems likely at this point that the pendulum has swung too far the other way, and that overly tight lending standards may now be preventing creditworthy borrowers from buying homes, thereby slowing the revival in housing and impeding the economic recovery.”

Factor #3: The Refi Boom is Over

Since the crisis, the Federal Reserve has been artificially holding mortgage rates low through buying mortgage bonds on a massive scale (mortgage bonds control interest rates). Savvy homeowners across America have taken advantage of these once-in-a-lifetime rates by refinancing their homes, creating a boom that lasted several years.

By 2014, pretty much everyone that was going to refinance into a lower rate has already done so and refinance volume has dropped to the slowest in a decade.  To make matters worse, rates have nowhere to go but up.

According to the latest Zillow Negative Equity Report, 17 percent of U.S. homes are still underwater (meaning the homes are worth less than is owed on the mortgages). Underwater homes are difficult or impossible to sell because the transaction proceeds usually aren’t enough to close out the current mortgage.  Occasionally a short sale can be accomplished as an alternative (where the lender agrees to accept less money than the property is worth), but they are very complex and difficult to complete.

While the number of underwater homes are troubling, there’s certainly enough supply to meet meager demand in most markets.  Additionally, home builders are always adding new properties to the mix.  It seems like the “inadequate supply” argument gets more attention than may be warranted by certain people because it fits into a certain “narrative” of a healthy economy.

Is help on the way?

It’s obvious that housing has problems considering mortgage lending has fallen as much as 66 percent this year.  Jobs and regulation are clearly influences, as well as supply and demand. Negative psychology is also in play, with many people uncertain about the benefits they can get from homeownership.

The unrelenting facts are that 6 years after the financial crisis, we’re simultaneously experiencing the lowest labor force figures in 36 years and the worst mortgage application volume in 14 years. That’s not likely a coincidence.  Disturbingly, our current leadership not only looks incapable of fixing these fundamental problems, but they also appear to want Americans to believe they don’t exist.